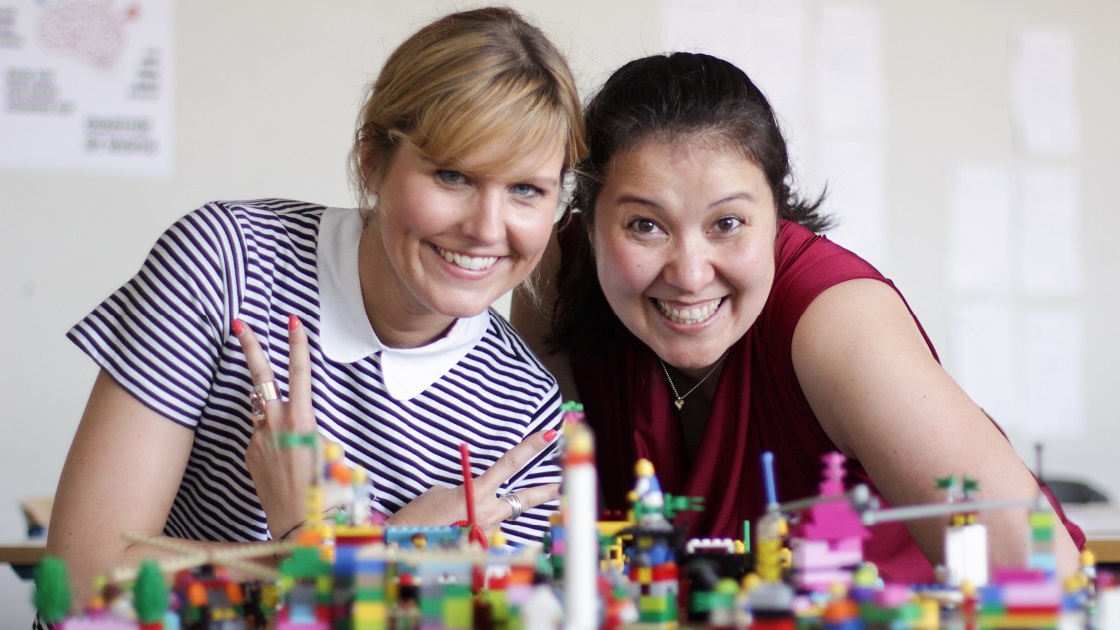 How do dreams come true?

Posted by
Future Young Entrepreneurs
Comments (0)
On the road to success, what is it that really matters? The idea itself or the team behind it? As experts in Design Thinking and business plan development, Sandra Schmidt and Mignon Fuchs of The Trainer Force know the answer. Zainab Saadoun met the two can-do girls to talk business.


1. You probably receive a lot of enquiries at the moment. What do you think makes founding a company so attractive?

Mignon Fuchs: Founding is so attractive, because it offers a lot of freedom to those with great ideas. Of course there are also quite some duties involved. At the end of the day, however, founding is always about making your very own dreams come true.

2. What do the participants expect of your workshops?

Sandra Schmidt: The participants have varying expectations. In innovation workshops, for example, they would like to learn how to generate an idea and how to found and promote their own start-up. In team trainings, on the other hand, the focus is on identifying the strengths of a team and on how to tap the potential of its members.

Mignon Fuchs: Some start-up founders come to us at a time when their company is already in a growth phase. Many things change during this phase. The team suddenly becomes really big. Sometimes an employee has to be replaced. In these cases, it might make sense to take part in change management training.

3. We all have ideas sometimes, but not every idea is worth a mint. What do you think is the recipe for success?

Sandra Schmidt: Any idea can be sold! When it comes to start-ups, it isn’t the idea that matters, but the team. No matter how great your idea may be a bad team cannot turn the idea into something real. If you have a mediocre idea or an idea that does not sound overly great at first, and an amazing team, you are more likely to be successful.

4. When you first heard about our project „Future Young Entrepreneurs“, what was it that made you want to be part of it?

Mignon Fuchs: It was the fact that truly young people, 15- to 18-year-olds, are introduced to start-ups. The selling point for me was the fact that they get a chance to experience the fascination of entrepreneurship as pupils already, instead of having to wait until they start studying at a university.
Sandra Schmidt: I was curious to see how much the teenagers would engage. I was excited to see the potential they have. On this first day today, we were already able to see the outstanding ideas they come up with. I was also surprised to see how familiar they were with working as a team.

5. One could assume that everyone would like to be his or her own boss. However, a survey by the European Parliament in 2014 showed that more than 70 percent of young people did not want to become entrepreneurs. What might be the reason?

Sandra Schmidt: I believe one of the main reasons is that young people do not have sufficient information on start-ups. Teenagers often do not come across entrepreneurship at all. Projects such as Future Young Entrepreneurs offer new perspectives to these young people, opportunities that they hadn’t even heard of. Entrepreneurship might not have raised their interest so far, because taking risks as a founder does not go hand in hand with their idea of a safe job and a guaranteed income. This believe is to blame, at least to some extent.

Mignon Fuchs: I think that one of the reasons why young people are so reluctant is that they have an impression of a huge company that they would have to manage. They somehow think of Mark Zuckerberg or someone of the like, figuring: “I will never be able to get there”. But it is relatively easy to get there. There are many smaller start-ups out there featuring more manageable dimensions. Those should serve as best-practice examples! Many more start-up entrepreneurs should be known, so that they can serve as role models for the younger generation.

6. You have been working intensively with these young people for a day now. What is your impression?

Sandra Schmidt: I am very pleasantly surprised. I think it is awesome how they work together! Their ideas are great and it is impressive how these young people engage in the project. In a way, it is game, but they do push themselves and work on their business plans very seriously.

Mignon Fuchs: I was very impressed by how easily these youngsters can tap their creative potential. They can switch from analytical processes to very creative thinking in the blink of an eye. That is something I find enormously fascinating.

7. What is the young people’s advantage over older entrepreneurs?

Mignon Fuchs: They bring along an unspoiled creativity and a bit of idealism. That became quite obvious when we talked about start-ups with a social impact today. They were immediately on fire and clearly committed to topics of public benefit and fairness. They are unbiased and deal with these topics naturally. This attitude is of great benefit for start-up companies. Another thing I found really interesting was that there were products and services particularly aiming at young people as a target group. Now that is a great advantage, of course! If you want to develop a product for young people, it comes in very handy to involve some of them in the development process. They can easily identify themselves with the target group and know its needs.

8. How can young people be made familiar with entrepreneurship?

Sandra Schmidt: They could do an internship in a start-up company while they are still in school. These companies welcome students with open arms! Especially, because the average age of people working for a start-up company is 28, so that the interns are usually not much younger than the founders themselves. Very often, even the CEO is not much older. A 17-year-old pupil can be integrated easily. There are also many opportunities to work at a start-up during school holidays. This kind of company is especially suitable, because you are immediately in the middle of it all and get to know the others quickly. Also, with a start-up company, you just call and ask if they have a vacancy. It is much easier than saying: “I want to do an internship at Coca Cola“. In my eyes, it could be difficult to become accepted as an intern when you have dropped out of school. That doesn’t go well with the idea of a start-up. It is not what start-up companies want. They want qualified people.

9. What are your wishes for the participants of the project “Future Young Entrepreneurs“?

Sandra Schmidt: I wish that they will draw up their business plans with all their idealism and this creativity they have, and that they will dare to deliberate even on the craziest ideas. I wish for them not to be too influenced by what is said to be possible or impossible. This is not the start-up way of thinking. Anything goes.

Mignon Fuchs: My wish for them is that they see how their idea turns into something big. That they can make a difference!